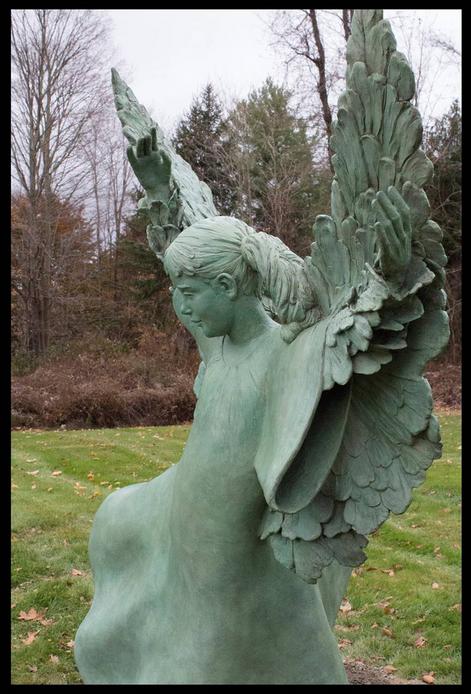 It was not what you might expect.  I had attended the Rhode Island School of Design in Providence , Rhode Island and completed four years, graduating in 1964 with a Bachelor of Fine Arts Degree in Sculpture....But  even this highly prized degree does not make you a sculptor.  A fine Arts Degree is rather like finishing up in the eighth grade in an elementary  school, when hopefully, you have learned a bit of English grammar.  You can read and write, but you are a long way from becoming a writer, let alone finding a publisher for your own works!  This takes years of dedication and more education in your chosen field, good timing and good luck!  It is this same process for the fine art of sculpture.  First you have to learn the rudiments of your chosen field and then along with the gifts of good timing and good luck...  You must teach yourself to speak sculpture, master that language and then hang in there and hope like anything that you will be able to survive.  Sculpture is decidedly not on Harvard's list of preferred financial activities!

In my case, before becoming a true artist, Death would have to walk beside me, hand in hand for more than a years before all of the education  acquired at the Rhode Island

School of Design  would be free to kick in and start the process of speaking this new language.  I had good timing, good luck, and a good education, thanks to my Grandmother Elise Simmons Gillet Boyce, who paid the RISD tuition. In addition, I had exactly the right set of parents which is of an incalculable value and in the end, perhaps the greatest gift of all.

"I have tried to capture those exquisite moments when dancers with their music, come together with great choreography to produce timeless, inter-generational treasures of fine art.  The quest is to imbue each figure with an independent spirit, implied movements and capture the essence of Dance in Bronze.  I believe that sculpture in the hands of a Master, should speak directly to the Soul of Man, as do the most moving words of

The year was 1966.  We were living just outside of Springfield, in the sleepy little hamlet of

Wilbraham, Massachusetts, where my husband Bowie Duncan, held his first teaching position. He taught English at the Wilbraham Academy, an excellent, private preparatory school for boys.  On November 2,1966, James McKay Duncan arrived on the scene: 7 lbs. 8 oz. Strong and healthy!  On March 19,1968 and well into our second year on campus, our second child arrived safely : 7lbs. 2oz.  Her brother McKay was delighted with the arrival of his little sister and promptly christened her "Gitty" a name with which she would be permanently tagged.  Gitty's birthday was happy and thankfully uneventful.  In those days, young mothers spent at least five days in the hospital after each birth, with plenty of time for the mothers to recuperate and... plenty of time to pick up an infection from the hospital environs.

It was during those postpartum days in the Springfield Hospital that our tiny treasure picked up a little sniffle.  This little sniffle however, turned out to be a very stubborn head cold, which would follow her home to Wilbraham. The sniffles did not go away however. Instead  a nasty head cold  would cling to her day after day, week after week.  The severity of her cold caused the hospital's pediatrician to hold off on her early childhood vaccinations.  "As soon as this cold clears up," her doctor assured us, "we will catch her up on her regimen of vaccinations."  Excepting for the sniffles, Gitty seemed to be very healthy and her doctor did not think a short delay in the administration of the vaccines would be something for us to worry about.  Gitty was a healthy, happy, Rosy-cheeked child and excepting for this persistent sniffle, her appetite and weight gain were good. Her checkups were fine too and our little angel thrived despite the head cold which continued to linger.... I mean it just hung in  there and would not let go!  After six weeks of being told that there was nothing to worry about I switched doctors.  Dr. H.H. Schumann of Springfield Massachusetts was now on the case.  He too preferred to hold off on Gitty's vaccinations until the last traces of the cold had left her body.  The cold, although not an apparent problem to Gitty, in and of itself, it worried me.  Not because Gitty seemed to be sick, to the contrary, she was thriving.  It was just that the cold hung in there and wouldn't let go...week after week with no let up. Because of this head cold we could not administer her vaccinations.

ViVi and Cameron Duncan, invited us to visit them in San Antonio, Texas.  I asked Dr. Schumann for his opinion and he assured us that such a trip would be fine for Gitty.  He felt that the Texas sunshine  would most likely kill off the virus and that we could catch her up on the vaccinations when she returned home again. Traveling by car was recommended as the congestion from the head cold could conceivably cause a severe and painful ear condition while in flight.  And so, the trip was planned and we were off... purring over the asphalt ribbons,  southward on old Route 66.  This was our first major outing since Gitty's birthday.

Dr. Schumann was right of course, and as soon as we hit the Texas sunshine, Gitty's cold vanished altogether. It was a joyous occasion and many of the Texas relatives stopped by  to welcome "Pretty-Gitty" into the world. All of San Antonio seemed to welcome us. It was    a lovely holiday together. We spent most of our time in Port Aransas, in the Duncan's summer home, close to the seaside on the Gulf of Mexico.  McKay caught his first fish with his grandfather, 'Big-Cam"....  a three inch special, all caught on camera of course!  We met many family friends at the luncheons and Bar-B-Qs. (Bar-B-Qs are big in Texas and very popular with every true Texan. )The swimming , fishing and walks on the beach, all made  for a beautiful and very welcome vacation.